The U.S. Court of Federal Claims has ruled against Jeff Bezos and Blue Origin in their lawsuit versus NASA. The lawsuit is over a $2.9 billion lunar lander contract that was awarded to Blue Origin’s largest competitor, SpaceX. Federal judge Richard Hertling rejected Blue Origin’s lawsuit and sided with the defense after months of ongoing legal battles.

In August, Blue Origin filed a lawsuit claiming that NASA unfairly awarded the contract to SpaceX and the first two missions to the moon. After a lengthy and tiring legal battle, the ruling decided that Elon Musk’s SpaceX will still be taking the $2.9 billion contract, as initially announced earlier this year.

Elon Musk even took the time to poke fun at Blue Origin by tweeting a photo from the science fiction movie “Dredd” in response to the ruling in favor of NASA. Bezos, on the other hand, tweeted that this was “not the decision we wanted” but still respected the judge’s decision and wished success to NASA and SpaceX.

The contract is for the Human Landing System (HLS) where astronauts will be transported to the moon for NASA’s upcoming Artemis missions. The astronauts will now be delivered aboard SpaceX’s Starship spacecraft.

NASA hopes that they can resume working with SpaceX as soon as possible after Judge Hertling ruled in their favor. The company was unable to work for the duration of the lawsuit and the mission to the moon will suffer some delays as a result.

The NASA contract initially included two missions where American astronauts while be transported to the moon. The deadline was set for 2024, but this was prior to the lawsuit and all the delays accompanying it.  According to NASA administrator Bill Nelson, they have “lost nearly seven months in litigation, and that likely has pushed the first human landing likely to no earlier than 2025″.

While NASA was banned from communicating with SpaceX until the lawsuit was over, some progress was still made. SpaceX had continued to develop the Starship on their own while respecting the legal limits placed on them.

Also, the delay may actually grant NASA and SpaceX some extra time to ensure the mission is as safe as possible prior to liftoff. This will be the crewed trip to the Moon since 1972 and both companies hope that it will be a great success. 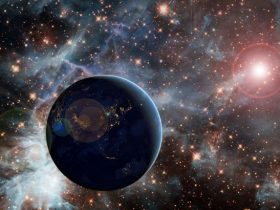 Exoplanet Could Be Revolving Around Three Stars Simultaneously

September 8, 2020
Load More
We use cookies on our website to give you the most relevant experience by remembering your preferences and repeat visits. By clicking “Accept”, you consent to the use of ALL the cookies.
Opt Out.
Cookie SettingsAccept
Manage consent